Don’t have time to clean the house? That’s what robot cleaners are for! Basically, they’re tiny computers that will do the hard work for you. All you have to do is set it up and you’re ready to go. Depending on the machine, you might even be able to control it remotely via an app.

That’s right, there are many different types to choose from. For example, there are vacuum robots and mop robots. While they’re both designed to do the same thing, their method of cleaning does dictate the type of floor that you can use them on. Take mop robots, for instance, they’re not exactly something that you want to use on carpets. Vacuum robots, on the other hand, can be used on almost all surfaces, though some may be better for others.

Compared to regular vacuums and mops, however, they can be a bit pricey. After all, you’re paying for the convenience. With that said, they’re generally a good investment.

Interested in getting one for your house? If so, you might want to consider the Kyvol Cybovac E31. Curious to know how well it works? What its different features are? Well then, you’re in luck because that’s the robot cleaner that we’ll be reviewing in this post. So make sure to read until the end!

Kyvol is a relatively new company that manufactures cleaning robots, at-home health tools, and other smart devices. Aside from the E31, which is a 2-in-1 device, they also offer an E20 and E30 model. For those who are interested in purchasing their products, you can find them on their official website or on Amazon.

The Kyvol Cybovac E31 is a 2-in-1 robot cleaner that’s capable of both vacuuming and mopping. Equipped with high-precession infrared sensors, you won’t have to worry about it colliding into furniture or falling down the stairs. Not only that, but it comes with smart navigation technology. In other words, it’ll be able to clean more efficiently. On top of that, it’ll automatically return to the charging base when its battery runs low. If you want, you can also use magnetic boundary strips to set No-Go areas. That way, it’ll only clean where you want it to.

Here’s a list of everything that you’ll get with the Kyvol Cybovac E31:

Like most robot cleaners, the E31 comes with an integrated water tank. To fill it up, remove the partition and flip open the lid on the backside; it can hold up to 300ml of water. When you’re finished, fit the tank back into the base of the cleaner.

Then there’s the charging base. Basically, it’s the docking station that will charge the robot. All you have to do is plug it into the wall using the power adaptor cable (included). If necessary, you can use the storage space on the back of the base to store the extra cord—that way, you’ll be able to keep the area tidy. 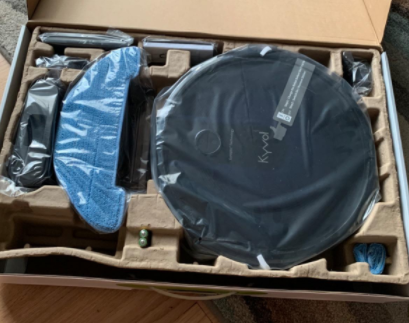 Also, it comes with a remote control (batteries are included) with which you can control the robot cleaner. More specifically, you can use it to access the different cleaning modes (e.g. spot mode, auto mode, edge mode, carpet boost). If you want, you can also use the arrow keys to manually adjust the direction of the robot.

As far as accessories go, you’ll get 2 side brushes and 2 mopping cloths (the E31 only uses one of each at a time so you’ll have extras). In addition to that, there’s a roll of magnetic strip that you can use to set no-go areas. All you have to do is cut it to length. From there, you can affix it in place with the included 3M adhesive pad.

The Cybovac E31 features an enhanced gyroptic smart navigation system that allows it to clean with a zig-zag pattern, which increases its efficiency by 30%. In other words, it won’t be cleaning your house randomly.

The robot cleaner comes with a mobile app (available for iOS and Android devices) that you can use to access all of its main functions. For example, you can use it to schedule regular cleanings. You can also use it to access the different modes (auto, spot clean, etc).

The Cybovac E31 features smart voice controls. In other words, you can tell it what you want it to do without having to use the app or remote control. All you have to do is connect it with Google Assistant or Alexa.

As mentioned earlier, the robot also comes with high-precision infrared sensors that prevent it from falling down stairs or other “cliffs.” In addition to that, it also has anti-collision sensors so that it won’t be constantly hitting furniture and other objects.

The E31 will automatically return to the charging station when the battery runs low. However, it will not resume cleaning afterward—you’ll have to restart it manually.

Here are a few things about the Kyvol Cybovac E31 that you might want to know about.

The robot can mop but don’t expect it to do a very good job. For one thing, it has a tendency of leaking water through the pad. Not only that, but the water doesn’t get close to the edge so it’s only the center of the cloth that’s actually doing the mopping. For sticky messes, etc, you’ll want to use an actual mop—this won’t be enough.

The Suction Could Be Stronger

The E31 supports three levels of suction (low, medium, high). Even on the highest setting, however, it won’t be as strong as a regular vacuum cleaner. Don’t get me wrong, it’ll still be able to get rid of small particles (e.g. dust, dirt, etc), but chances are, it won’t be able to pick up larger debris.

The robot is capable of navigating decently most of the time. That is, it will get stuck while cleaning sometimes. Not to mention that it can favor certain areas. Given that, the cleaning might not be as efficient as you’d like. If you notice it going over the same area, it might be worth it to place it in a different location.

It Will Die Sometimes

The E31 is capable of returning to the charging base automatically. With that said, it will die in the middle of a room sometimes. If that happens, you’ll have to pick it up and put it back at home base manually. Fortunately, it’s not too much of a hassle.

The Remote Control Doesn’t Work From Far Away

The remote control isn’t very strong—that is, it won’t work if you’re far away from the robot. Fortunately, that’s not a major issue seeing as how you can connect it with the app.

It Works Better On Hard Floors

The E31 is best suited for hard floors such as hardwood. While you can use it on carpets and rugs (vacuum mode only), the side brushes can get stuck sometimes. In fact, some people have said that their rugs have caused them to fall off. Given that, you might want to clear the area before using it.

Does It Clean Well? 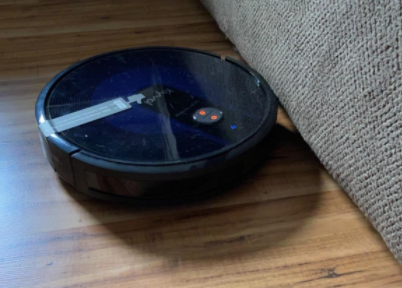 Honestly, the Kyvol Cybovac E31 isn’t that great at mopping.  Like we said earlier, the tank has a tendency of leaking and only the center of the pad gets wet. Even when you do get it to work, it’s only capable of removing surface dust, debris, etc. Don’t expect to use it for stubborn messes. If anything, it only drags a damp cloth around. You’re better off using an actual mop, or even a rag for actual stains.

It functions better as a vacuum than as a mop. With that said, its suction is not that greatest. You’ll be able to get rid of dust bunnies, etc, but larger particles will most likely be left on the ground—even if you’re using the highest setting. The side brushes aren’t that durable either. While they do their job, they can break quite easily. Fortunately, it does come with a few extras. On the plus side, the vacuum is pretty quiet, much more so than your average machine. 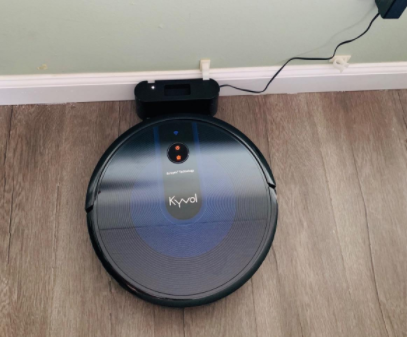 Start by peeling off the sticker on the top of the robot. Once you’ve done that, remove the protective material from both sides of the device. Next, install one of the side brushes into the side brush mount. From there, you want to set up the charging base. Place it on a flat surface against the wall and connect the power adaptor into the base. Make sure that there are no objects around the station.

Note: It’s important that you fully charge the E31 before using it for the first time (it takes 6-6.5 hours).

Once it’s fully charged, you can start cleaning by using the remote control or the app. If you’re mopping the floor, you’ll also have to fill the water tank with water.

It’s important to perform regular maintenance on your robot. For one thing, you want to empty the dust bin after each use. As for the filter, you want to clean it once per week (more if you have pets). The water tank and mopping cloth should also be washed after each use.

For a 2-in-1 device, the Kyvol Cybovac E31 is quite affordable. Currently, it sells for $299.99, which is much cheaper than some of the other robot cleaners out there. What’s more, is that it tends to go on sale every once in a while. For example, there’s a $50 off coupon at the time of this writing. Shipping is included as well so there are no extra costs.

For those who are interested in spare parts, Kyvol does offer them in their shop. For example, you can get extra filters. They also sell extra magnetic tapes and replacement parts such as brushes, side brushes, etc.

The Kyvol Cybovac E31 is an affordable 2-in-1 that’s capable of both mopping and vacuuming. Not only does it come with a remote control, but there’s also an app that you can use. In other words, you can easily control it from a distance. It also comes with magnetic boundary strips that you can use to set no-go areas. Like all robot cleaners, however, it does have a few drawbacks. First and foremost, its mopping ability is quite underwhelming; the suction is also not the strongest. Not to mention that the pathing can be kind of inconsistent. With that said, it should be enough for light cleaning. 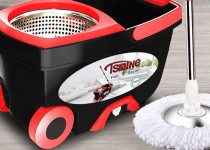 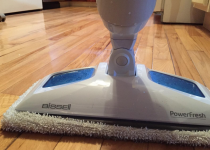